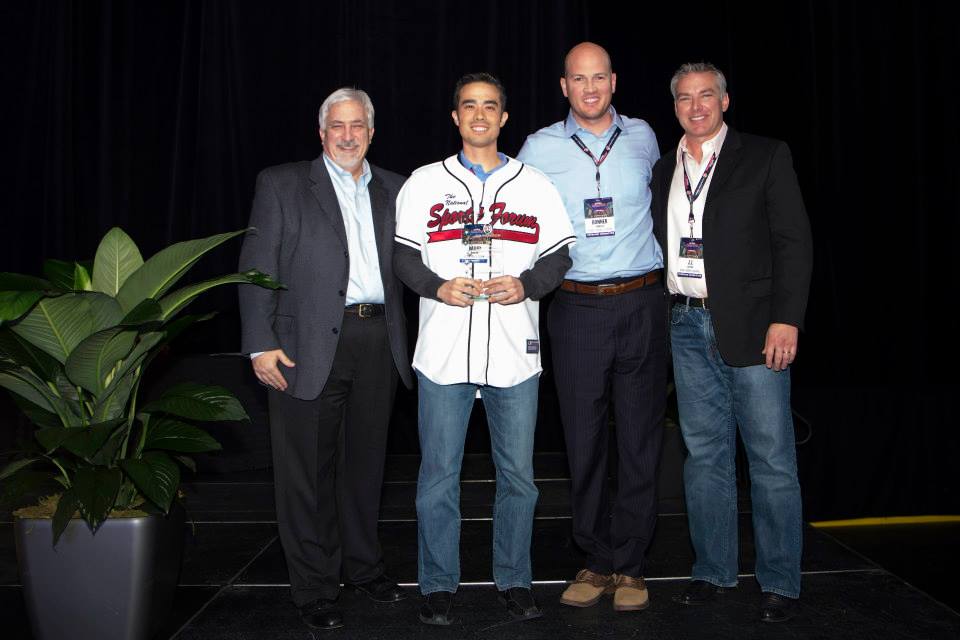 Dallas, TX (2/12/2014) – The National Sports Forum, the largest cross-team sports sales and marketing conference in North America, is pleased to announce along with the OM Foundation the first-ever OM Foundation Award Recipient.

The 2014 OM Foundation Award was awarded to Danny Heinsohn, Business Development, Access Pass & Design. The award celebrates someone in the industry who has overcome obstacles to find success and in this case, made a difference in the lives of others. Danny was presented the award during the final event of the 2014 National Sports Forum, the Budweiser Gala at the American Airlines Center. Danny Heinsohn, long-time NSF Alum, is a brain cancer survivor, accomplished endurance athlete, tenacious sports executive author, speaker and the executive director of a scholarship fund for young adult cancer survivors.

The OM Foundation Award will be presented annually to a new recipient at the National Sports Forum.

Danny Heinsohn
Business Development, Access Pass & Design
A career in sports business was an unlikely path after graduating with a degree in Electrical Engineering. However, after a brain cancer diagnosis in 1999, Danny endured three craniotomies, an entire year of chemo, and battled through a year of depression. After that, everything changed.

While Danny grew up playing baseball, basketball and tennis, he found salvation through endurance sports after chemo. Soon, salvation turned to passion, and passion turned into success. Over the years Danny has raised over $125,000 for the Leukemia & Lymphoma Society by training for marathons, coaching a cycling team, and competing in several triathlons.

Danny was inspired by Bonner Paddock’s initiative to help children with disabilities, when he announced the OM Foundation at the 2009 National Sports Forum. In 2010, Danny celebrated his 10th year of brain
cancer remission by founding My Hometown Heroes, Inc., a scholarship fund for young cancer survivors and competed in Ironman Canada to raise $10,000 symbolic of the decade milestone. He just finished writing his first book, “For a Reason” which is currently available through www.dannyheinsohn.com.

About the OM Foundation:
OM Foundation (OMF) is a non-profit started in 2009 by Bonner Paddock to build and support early learning centers for children with all types of disabilities in the U.S. and Africa. Bonner, along with his foundation, has raised over $1 Million Dollars for special needs children by summiting Mt. Kilimanjaro in 2008 and completing the Ironman World Championship in Kona, Hawaii, in 2012 unassisted. Bonner was the first person with cerebral palsy to achieve both. Bonner, through OM Foundation and speaking
engagements, promotes the idea that “any one person can make a difference if they dedicate themselves to look beyond their own personal limits to achieve their goals”.

About the Forum: The National Sports Forum heading into its 20th year, is an annual three-day sales and marketing conference that brings together over 900 of the top team, event, agency, and sponsorship executives to network, share best practices, and explore issues and opportunities that affect the sports industry. The conference includes three days of keynote speakers, breakout sessions, panel discussions and behind-the-scenes tours. Hosted by the Greater Cincinnati Sports Coporation, the 2015 National Sports Forum will be held February 8 – 10, 2015 at the Duke Energy Convention Center in Cincinnati, Ohio.