A man with cerebral palsy will climb Mt. Kilimanjaro 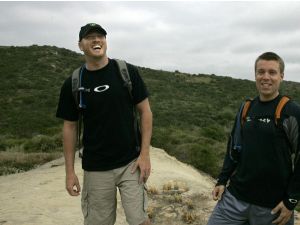 NEWPORT BEACH The moment Bonner Paddock enters a room, his eyes search for the 90-degree angles in doorways, pillars, table legs and standing people. The angles signal up from down for a man born without a sense of balance.

Turn out the lights and a dizzying tornado tears through him. He loses his compass. He sometimes falls, trips over his gimpy left leg, maybe skins a knee the way he did thousands of clumsy times as a child.
Paddock, the Honda Center’s director of corporate sponsorship, has had 32 years to adjust, to find the angles, to fall, to rise and to catch himself before he tumbles.

He has groped his way through sports. He stumbled through a marathon, becoming an inspiration for a family with a son who couldn’t walk.
He staggered around the rugged hiking terrain of Crystal Cove on a recent afternoon to train for his next I-told-you-so challenge, proving there’s a life to live outside the limits of cerebral palsy.

Paddock wants to climb a mountain now, the 19,341-foot tall Mount Kilimanjaro.
“Just to show that I can,” he says.
But his desire to get to the top is rooted in all times he fell. If Paddock had believed what doctors told him, he should have been in a wheelchair at age 15, dead at 20. He wouldn’t be near the bend of a Crystal Cove trail, panting, sweating, digging his hiking boots into the dusty earth and climbing.

On May 22, 1975, at 4:13 a.m., Andrea Paddock gave birth to her third child and worried about the silence.
“Shouldn’t we be hearing something by now?” she asked the Fontana hospital delivery-room doctor who huddled over her baby, untangling the umbilical cord coiled twice around the infant’s neck.
Nobody realized then that the 8-pound, 2-ounce baby was harmfully deprived of oxygen, that part of his brain died and that his life, specifically his steps and his motions, were forever changed.
He toddled until he was 2, his left leg dragging behind his stronger right. He often tripped over his own feet. But with tears dripping and knees and elbows the color of crushed raspberries, he kept trying.
He was happiest in motion, making friends and telling jokes, even ones about his crooked gait. But his first grade teachers told his mother about the tantrums he threw when his repeated tumbles left him frustrated and embarrassed.
Doctors – seven pediatricians with seven diagnoses – fitted him with heavy saddle shoes that made him feel awkward. Physical therapists tried so often to teach Bonner how to walk properly that the words “heel-toe, heel-toe” became a mental soundtrack with each step.
When he was 8, an orthopedic specialist put casts on his lower legs for six months. But Bonner soon tore through the plaster, prompting the specialist to extend the cast up to the boy’s hips.
“I felt like a lab rat.”
Bonner still kept playing baseball, taking swings at the plate while a teammate ran for him.
“He was just a kid,” says Andrea Paddock, who spent many baseball nights scrubbing the bottoms of the cast free of the diamond’s red dirt. “I had to let him play like the other kids. Sports made him happy.”
Bonner followed his older brothers, Mike McConnell and Matt Rinn, to the baseball diamond, the basketball court and the soccer field. His limp made him slower than other kids, but he made up for with smart play.
He learned to switch hit in baseball, drain three pointers in basketball and became a goalie – the position no kid wanted – in soccer. All the years of catching himself before falling had quickened his reactions.
“I knew I couldn’t keep up in every way,” says Bonner, who moved from Arcadia to Mission Viejo at age 13. “But I tried to fit in.”
He would face another hurdle.
On his 11th birthday, Bonner and his mother listened to one more diagnosis: syringomyelia, a disorder in which a cyst forms within the spinal cord. The cyst typically expands, causes paralysis and, ultimately, death.
“The doctor told me I’d be in a wheelchair by 15; dead by 20. We left shocked. I didn’t know what to say.
“I hoped he was wrong.”

A few months later, Bonner’s oldest brother, Mike, suffered a weightlifting accident that left him with constant headaches. He was referred to UC Irvine neurologist Arnold Starr, who took an interest in Bonner’s condition after learning Mike’s family medical history.
Starr, a noted researcher, had Bonner undergo an MRI and a CT scan. Bonner walked a hallway a hundred times, forward and backward, eyes open and closed.
When Starr knocked Bonner’s left knee and elbow with a rubber mallet, Bonner saw how these joints remained motionless, absent of normal reflex. For another test, he felt electrical impulses tickle the dozen metal pins into his scalp.
Then Starr concluded that Bonner degenerative syringomyelia but, instead, a mild form of cerebral palsy, a disability in which the oxygen-deprived part of Bonner’s brain fails to control movement on the left side of his body.
“I got my life back,” Bonner remembers. “Dr. Starr told me that my condition wouldn’t get worse.”
Bonner threw himself into soccer and learned goalkeeping techniques by watching videos. He dribbled the ball around backyard; defended a net against his brothers’ shots.
He made the Rancho Santa Margarita High soccer team as a freshman.
But his high school soccer career ended before he played. His legs tangled during a pickup basketball game and he fell, again breaking bones in his left arm. He became team manager for three seasons and friends with players who would become college soccer stars.
Three days before starting is freshman year at Saddleback Community College, Bonner asked his ringer buddies to join him for an indoor league soccer game in Garden Grove. A Concordia University soccer assistant saw Bonner defend the net and offered him a tryout the next day.
“The coaches asked me about the limp, and I told them I had CP,” recalls Bonner. “They didn’t know what to say.”

Three years ago, he went to work for Henry and Susan Samueli, the new owners of the hockey’s Anaheim Ducks and the Honda Center.
“I liked Bonner’s energy, his personality and the way he talks to people,” says Bob Wagner, the Ducks senior vice president and chief marketing officer, who hired Paddock. “I had no idea what he had been through.”
When the Samuelis urged staffers to take up philanthropy during the 2004-05 NHL lockout, Paddock contacted the Orange County chapter of United Cerebral Palsy. His condition became his cause.
He visited children with CP and shook with emotion. They sat in wheelchairs, unable to walk. Some mumbled noises, unable to talk. They held their parents’ hands. Soft touches, shared.
“Why me?” wondered Bonner. “Why did my brain fix itself so I could live my life?”
So he ran half the 2006 OC Marathon cold. Near the finish line, he met Stephen Robert, who lifted his son, Jake, 6, out of his wheelchair and carried him over the line.
“Jake had CP and his father ran because Jake couldn’t,” says Paddock, tearing up.
“That night of the marathon, he died.”
Paddock promised the Robert family he would run the full marathon in 2007 for Jake. Paddock made good on his promise and raised $20,000 for the local chapter of United Cerebral Palsy.
Then Paddock decided to do something more, something that no person with CP probably has ever done. Last winter, he began training to climb Mount Kilimanjaro. His goal is to raise $250,000 to help launch the United Cerebral Palsy OC’s Early Childhood Learning Center.
Five mornings a week, he puts himself through two-hour gym workouts. Two days a week, he hikes 10 miles through Crystal Cove.
He’s worried about the final leg of the climb, the trek to the summit. It will come at night, in the darkness that steals his ability to find his balance.
“Maybe I’ll rope myself to one of the guides,” he says. “I’ll find my way up there somehow. I’ve come this far.”